The final, 5th training was held in Kavarna municipal hall the auspice of the Mayor on 19th of March, the last day of the project.

There were 23 participants from the target municipalities in the Dobrich region, District office, hotel and restaurant managers, transport companies and journalists. 5 persons from the CSDCS team working on SEEMORE were there. Prof. Ilieva presented the final results from the implementation of the SEEMORE measures in the region and the new possibilities for projects development under H2020.

The second part of the meeting was dedicated to the presentation of the Kavarna SUMP elaborated by the project team in close collaboration with Kavarna municipal experts, which was officially submitted for acceptance by the City Council. As the first pilot SUMP for Bulgaria, it provoked a big interest from the part of the media, which took interviews and made a lot of publications about SEEMORE and the SUMP.

Presentation of the project SEEMORE

Presentation of SUMP in Kavarna

Protocol for Transfer of SUMP 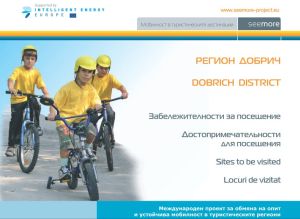